The endocannabinoid system (ECS),
also referred to as the endogenous cannabinoid system,
is a complex physiologic network that stretches throughout the human body
and helps establish and maintain overall health and wellness.

Initially, scientific findings suggested that the endocannabinoid system function was only connected to the brain and nerves; however, throughout the years, researchers discovered that the ECS encompasses several parts of the body, including skin, gastrointestinal tract, bone, tissue, and other biological structures. And now, modern studies explain the involvement of the ECS with many different physiological functions such as sleep, metabolism, mood, appetite, stress, and general pain – even reproductive and immunological abilities. 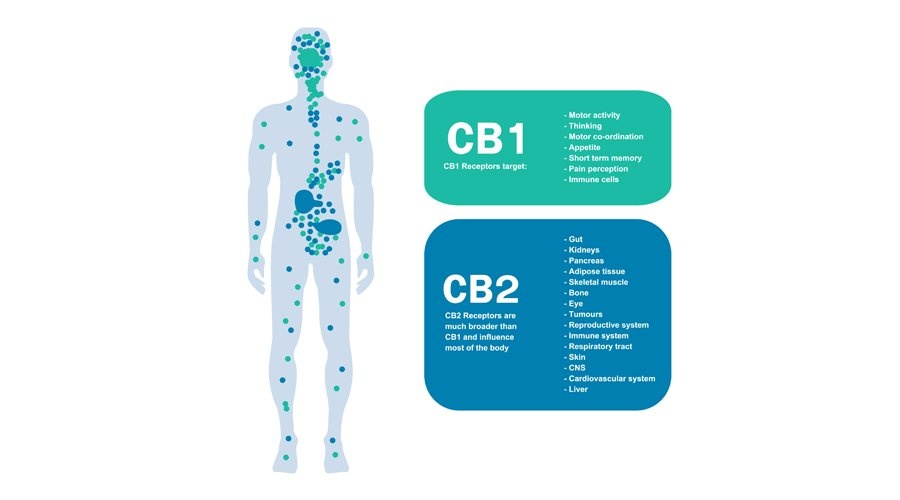 CB1 receptors are predominant within our central nervous system (CNS),
which contains our brain and spinal cord; they can affect or send transmissions to the connective tissues, neurons, glands, gonads, and organs associated with the CNS.

CB2 receptors are more prevalent with the peripheral nervous system (PNS),
consisting of nerve fibers branching from the CNS and stretching to many different organs and parts of the body such as various limbs, skin, muscles, and immune cells.

Cannabinoid receptors work by transmitting information to the inside of the cell regarding conditional changes; this process then starts the most suitable cellular response. And many tissues can have both CB1 and CB2 receptors that link to different actions. They become active primarily through the use of endocannabinoids.

And even if you don’t use CBD products or cannabis, the ECS still functions and remains active inside your body. For the endocannabinoid system to work correctly, it uses three critical components: